Most of us are aware of the synchronicities that happen in our lives. You're thinking of someone you haven't seen in a long time, the phone rings and they're on the line.

Or, you're involved in some type of undertaking and notice the clock reads 11:11 or 2:22. As time goes on, whenever you need a confirmation of a direction on the path, the 11:11 or 2:22 or 4:44 readouts on the digital clock appear, causing noticeable milestone affirmations for whatever you're doing.
During a recent sabbatical and retreat to the north Georgia mountains, I observed however that there was an enormous gap between synchronous events and being in alignment with an ideal. Thoughts or desires which had been set in motion years ago had in fact materialized during what felt like a timeless two weeks. Knowing that every thought creates a ripple effect in the etheric field it was suddenly easy to go back and relate how these concurrent desires had manifested as though laid out by an unseen force.
The lives of my partner and I were changed when we were introduced to the teachings of Paramahansa Yogananda over 40 years ago. As students of his teachings, we placed a wish into the ether years ago to meet a disciple who personally knew the great Eastern Yogi, who had brought Kriya Yoga to America in 1920.

As we planned various stages of our mountain sojourn which pivoted a visit with friends in South Carolina, the dates of our trip changed three times for various reasons before settling on early June. It would soon be revealed why those other dates had been discarded so easily.
We knew that one of Yogananda's direct disciples was 80 year old Roy Eugene Davis who studied with him in the early 1950's. Mr. Davis is the Director of the Center for Spiritual Awareness in of all places, the north Georgia mountains. Since we were to be in that area, it was our hope to be able to stop by the center and perhaps meet or just catch a glimpse of Mr. Davis. As it turned out, Mr. Davis, who had been ill with pneumonia for many months the past winter and spring, was personally conducting a retreat at the center in early June right when we would be there.
Our stars had aligned and the date changes suddenly made sense and confirmed that we were off to an unusual start to a mystical journey. As though adding more confirmation to our alignment of dates during the trip, Mr. Davis told a story of his own alignment with spiritual destiny when the previous owner of the center with its extensive property donated it to him for his spiritual work.
In the serene and peaceful setting of the mountains, we attended the retreat with

guests from all over the world. Time felt like it was suspended and stretched out indefinitely with meditation at dawn to start the day into the evening when a talk or film ended the session.  While both of us had been taught and initiated into Kriya Yoga previously, Mr Davis announced he would personally impart Kriya-Pranayama initiation on the fourth day of the retreat to all attendees. It was an unexpected blessing that had been bestowed in the spiritual alignment that had been guiding the trip.
Reflecting on the many favors of the retreat during one afternoon's lull, we realized that we'd come to the mountains with three threads of desire and that in some way, each was related to the other and each had been granted. One wish was to meet a direct disciple of Yogananda. We'd been in the presence of Roy Eugene Davis for days, receiving his teachings his advice and counsel and his daily blessings. That one fell into place with divine ease. 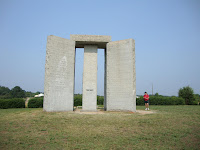 The other two took form with equal ease. The second desire was to find the Georgia Guidestones, an astronomically aligned set of 20' tall granite structures that were mysteriously erected mysteriously erected in Elberton by a stranger who came to town. These Guidestones have been called America's Stonehenge. This thread, "just happened" to be on our GPS designated route from Sarasota as we traveled to CSA headquarters. What's the chance of that? 100% when you're dealing with divine alignment.
Finally, having studied sound and sound healing for several years, the third desire was to find and experience one of the "Sound Chambers" constructed by Native American mystic Joseph Rael. We knew one to be in the Georgia mountains, but were not quite sure where or if we could find it. Google searches had given us a list of sound chambers by city or by state but no means of contacting any of the owners of the chambers. Then two days before departure, I was compelled to continue the Google search.
As links usually take you to more links I found myself pulled down the Google rabbit hole, until one link gave me a phone number and the name of a woman who was the supposed "keeper of the chambers." Although, the phone number was no longer in service, I searched on the woman's name unearthing a name change and ultimately a Facebook contact point.
After speaking with her for over an hour explaining our story, she agreed to meet us. In another synchronistic flash, the only afternoon she could meet was on our one free afternoon from retreat. Inner guidance told us to embrace this opportunity and we agreed to meet in the parking lot of a small McDonald's on a remote highway in

the north Georgia mountains. Our intuition had been right for she knew the location of a Sound Chamber, not 5 miles from our retreat center, and she was willing to guide us there.
We followed her on a gravel road, that turned into a dirt road, then into two tracks covered with pine needles, then to an open field. Gleaming in the distance was a large mirrored pyramid set in the center of a circular garden. The stunning, sun-lit pyramid was at the rear of the actual sound chamber which we unable to enter.
Undeterred, the three of us set up in the energy of the pyramid, laying out blankets, a small candle, white sage, and drums. Toning the vowel sounds of the four directions taught by Joseph Rael brought an answering chorus from the birds in the trees. A small stream nearby accompanied us as we alternated chanting mantras of many religions, finally ending when a bloodhound emerged from the woods, walked into our circle and began to howl his own chant. We laughed feeling nature had answered our call and confirmed our alignment.

Many years ago three desires were released into the world of thought. The three desires were based on spiritual ideals. In June 2011, when a very needed spiritual sabbatical was put in motion, those three threads resonated in similarity. Their frequencies vibrated and aligned in such a way as to bring all three wishes into physical manifestation in the mountains of Northern Georgia. We realized that these were not individual synchronous events separate from the other. Rather they were a much greater unfolding gift that had been flowing from the creator of all life. Synchronicity is two or more separate events showing a causal relationship. In alignment, all the seemingly separate parts of a system come into the functioning harmony of all the related events.
In that conscious awareness, synchronicity was a stepping stone to the grandeur of the pure current of alignment. That state of alignment, bonded with spiritual ideals, creates a magnificent feeling of connectedness with the blessings of universal allness. It is a feeling that swells joy in the heart and brings tears to the eyes. May we all experience that place some day!
+++++++++++++
Jo - July 2011
Posted by StarSoundings at 2:30 PM No comments: