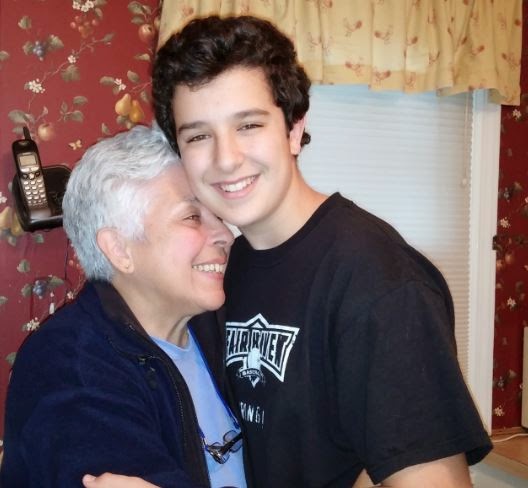 “I love you so much, Moo Moo” he said, putting his arms around me and resting his head on top of mine. He was 15 years old when he said that - an age when most teenagers hardly utter a civil word to members of their family, much less express such a heart-felt emotion to a visiting grandmother. It was so unexpected I couldn't respond. So I just hugged him back, content in this moment of enjoying a grandson's surprise expression of love.

No longer interested in the video games they'd been playing for hours downstairs, he and his younger brother sat with me as others cleared the table from Thanksgiving dinner. They asked me questions about my childhood and where I'd grown up, laughing at some of the stories. I remembered for them each of their births, recalling how I'd raced two and a half hours across several states to see them when they were but hours old. It was no struggle to remember the dark haired infant that was now six feet tall standing next to me.

When just the three of us were alone, he asked me a question that revealed not just how much he'd grown but also portrayed the depth and maturity of who he was becoming. He asked me, “Moo Moo, is there anything that I did that you would not forgive me for?” I just looked at him, stunned by the question. I was not yet ready to answer him. My mind raced in countless directions, wondering why he asked that question of all questions. He returned my gaze quite easily so I asked him let me think about that a moment. He continued to stand there patiently waiting for my answer. His younger brother slid over to a chair closer to us, also intent on my answer. Because both brothers were very close I knew whatever I said would be later dissected and discussed in private.

After a moment of silent centering and an invocation for guidance, I told him that love and forgiveness were interchangeable pieces of the same emotion. I told him that I would always love him and his brother. That they might do things in life that could hurt many people, some of which might be judged unforgivable, but love would always be constant. “Like what?” he asked. Realizing I was letting a “teaching moment” get away, I took the plunge.

Here's a short list of some things that could badly hurt you along with the most important people in your life. These things damage your character or your body and would be hard to forgive because you have control over them. They moved closer. I held up my closed hand, listing each of four things with an outstretched finger. “Doing drugs. Misusing alcohol. Intentionally hurting others. Not sticking up for the underdog.” In unison they both said “We don't do drugs.” With one item cleared off the list I knew they'd be thinking about the other three for a while.

Both of them were quiet for a few minutes. Then the oldest one again put his arms around me and said, “So you would always love me?” Yes said I, but remember, the older you get, the longer the list gets. They hugged me and headed off to the next round of video games while I sat by the fire thinking about “What's Love?”


I went through a litany of things that I know Love is. Love is a chemical reaction. Love is compassion. Love is emotional commitment. Love is a magnetic binding. Love is service. Love is kindness. Love is a spiritual experience. Love is God. But on that Thanksgiving afternoon, Love was my 15 year old grandson wrapping me in his arms and telling me he loved me and asking about forgiveness.
Posted by StarSoundings at 5:32 AM No comments: