There's a traditional view of reincarnation that most of us subscribe to.  We're born 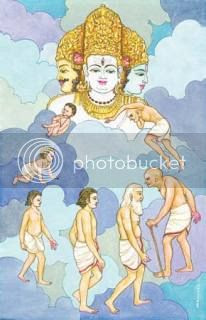 as a baby, go through life, get old and then die.  Then after death we're told our soul goes somewhere.  The "somewhere" depends on the religion or belief system we were born into.  After a period of time, we come back or reincarnate into another body and do the same thing all over again.

But what exactly comes back into incarnation each time?  That question was the focus of  my esoteric studies for many years.  Reincarnation is a key tenet in many Eastern religions.  The Gnostic scrolls, unearthed in the last 60 years, point to the unmistakable teachings of reincarnation that were taught by Jesus.  It's clear in the scrolls that one's fate is determined by one's current life.  But what about the soul?  Where does it go?  What does it look like?  Does it come back?

Reincarnation has become part of the mass consciousness in the last 50 years.  Highly regarded researchers like Dr. Ian Stevenson of the University of Virginia used scientific protocols to exhaustively research over 3,000 cases of children worldwide who claim to have reincarnated.  But another phenomenon causing scientific interest is called Near-Death Experiences or NDEs.

Dr. Kenneth Ring is Professor Emeritus at the University of Connecticut and one of 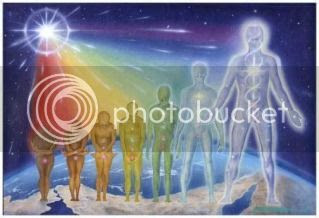 the leading scholars on NDEs.  In one of his documented cases a girl who nearly drowned at the age of 7 reported seeing two adults "waiting to be born."  In another case, an individual stated she got information from a group milling around as "they were all waiting for reincarnation."  Again the questions came - who or what was waiting to be born.

My own research took me to the most ancient religious writings of India.  The Hindu Vedas said the soul reincarnated.  The Yoga Sutras say the same thing.  The Buddhist teachings state the "soul is reborn."  That sounded good enough.  The NDEs said people were waiting to be born, but what did the soul look like?

I turned again to the individual stories of those who had Near-Death Experiences.  One said, "I became a ball of light."  Another said, "spiritual beings were observing me inside a crystal sphere."  A young man described "A shimmering, luminescent sphere enveloped me, making me feel as if I had stepped into a crystal globe."  And in a well documented case, a young woman said, "I was there with this glowing orb." 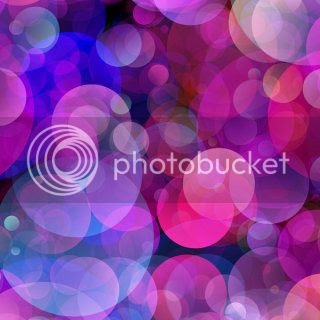 Looking to back up the NDEs with the teachings of the mystics, I went to the Eastern texts.  The Hindu Vedas describe the soul as a "gossamer light" and more telling,  "a bubble of light."  The Sufi mystic teacher Inayat Khan said the soul was "a sphere of light."  With those definitions, the connection was instantaneous.  Orbs are images of the soul or spirits.

With the advent of digital photography a phenomenon called Orbs began to appear in photographs.  Orbs are spherical and transparent bodies of light that superimpose themselves in the photo.  Orbs appear most frequently in nature photos or during highly charged emotional events like parties, funerals, or children playing.  Sometimes the Orbs are stationary, other times they're in motion, leaving a trail of light behind them like a comet.

Some claim that orbs are simply dust, pollen, or atmospheric conditions that occur due to the reflection of light in the camera.  Others dispute that theory as do I.  Why?  Because, though I've seen Orbs in my photographs since 2003, I've also seen Orbs without a camera and witnessed them "powering up" when spoken to.  The 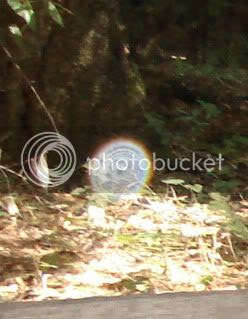 most remarkable occurrence was two days after the death of my neighbor.  The lights in my house began to flicker on and off.  When I ventured into the living room I saw two very large Orbs near the ceiling.  Realizing Kathy had just passed I asked, "Is that you, Kathy?"  At that moment, one of the Orbs powered up brightly and stayed that way for about ten seconds.  Knowing Kathy wanted to be with her mother who had previously passed over, I asked "Is that your mother with you?"  And the second Orb powered up.  Eventually, they both faded from view, but not before being documented by two people in the house.

The mystical interpretations offered by the Hindu Vedas, Inayat Khan, Edgar Cayce  and the many Near-Death Experiencers do point to a common definition of what the soul looks like.  The soul is an Orb or an iridescent Sphere of Light.  And now the technology is available to see the soul with our digital cameras.  And yes, we can even communicate with it.  The next time you photograph an event, look for the Orbs in the viewfinder.  If you don't see them, feel them.  If you can't feel them, speak to them and invite them to appear.  They will!  I've done it for ten years.