9.9.9 Activation of the Inner Crystal of the Heart

This is our story of the 9.9.9 Prism of Light Crystal Activation. Our spiritual

community united with others who gathered all around the world last Wednesday evening to embrace a vision, hold ceremony, set sacred space, join in meditation and activate a crystalline form in each of us that was centered in the heart.

In preparation for the 9.9.9 event a visionary call was sounded that a large diamond shaped prism of light would be created on the crystal sands of Siesta Key Beach. The creation of the Prism of Light represented a physical visual of the "Inner Crystal" that would be activated within each person that evening. In the weeks leading up to the ceremony participants were guided to prepare themselves with the Tibetan

practice known as the Elemental Breaths. Crystals were bathed in salt water and purified under the rays of the sun. And so, preparations continued across the community as the design of the Prism unfolded in meditation.

To set the stage, you might remember that six months previously on the Vernal Equinox of 2009, a large citrine and quartz terminated crystal was used in our ceremony at the Labyrinth. It was placed on the altar in front of the Crystal of Peace Mandala while Sufi master teacher Shahabuddin David Less offered prayers and blessings for over 200 people who’d gathered. Twenty-four hours after the Equinox ceremony ended, the crystal split into two perfect halves like two bookends, each half able to stand by itself.

A crystal splitting in half is not unique. What was unique was the crystal also splintered off a three-inch sliver in the shape of a key. When the two parts of the crystal were placed together, "The Key" kept the two sections locked in place. 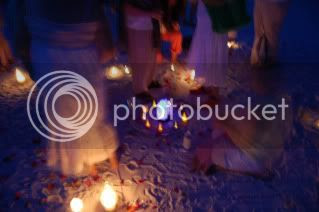 When "The Key" was removed, the two sections could be opened. That Crystal was placed in the center of the Prism to anchor and to be open to all the offerings of the heart. It was lit from below and surrounded by sands from sacred sites all around the world which included Giza, Machu Picchu, Petra, Jerusalem, the Great Wall of China, the Galapagos, Angkor Wat, the HathorTemple, the Maori Wahi Tapu, Lake Titicaca, as well as Sai Baba Vibhuti and ashes from the Dalai Lama's temple in Dharamsala.

In keeping with the integrity of the number 9, the design took form on the beach at 6:30 pm. People came from all over southwestern Florida to hold sacred space and to be part of the ceremony. They came alone or in small groups. They brought babies as young as 3 months and great-grandmothers as old as 90. They

brought their offerings, outlining the design with large and small crystals, lit candles, statues, flowers and vases of holy water. They reverently placed their gifts in the nine-foot diamond prism, some of them fashioning small altars, then took their seats across a 54 foot outer circle as the tones of Diana Daffner's flute and Sam Laundon's bamboo saxophone filled the air.

At the start of the ceremony at 7:02 young children carried rose petals to the center of the circle, tossing them throughout the crystals and candles. Shaman Mic McManus called in the spirits devas and guides of the four directions. As if summoned to participate with us, dolphins made an appearance in the shallow surf, as flocks of seagulls soared overhead, and dozens of dragonflies circled the gathering throughout the evening.

Rose Lettiere, known as the Waterbearer intoned a blessing around and through the Prism. Rose carries waters collected from sacred sites around the world which 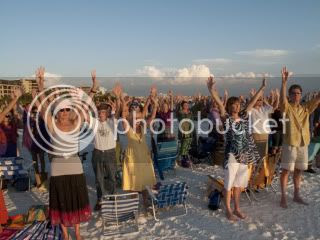 are used for many of our ceremonies. She sprinkled drops of the holy waters on the crystals and the altar while ringing a Balinese priest’s bell and offering a prayer.

A guided meditation led by Rev. Zan Butterfly Deerwoman balanced the chakras, activated the crystal within, and opened the heart center. Two crystal bowls were toned in accompaniment as the meditation conveyed the power of the vision and filled the gathering with the solemnity of the activation. The meditation affirmed the spiritual inter-connectedness of each of the 300 people on the beach with all those holding similar ceremonies around the world.

That gathering radiated a holy feeling across the atmosphere. Men and women who were on the beach to watch the sunset gravitated to the circle. A few new arrivals to the city had come to the beach seeking “the spiritual community” and experiencing the meditation and gathering, knew they’d found it. One very tiny great-grandmother who spoke no English mimed that she wanted to touch the Key Crystal. She bent her elderly body to scoop up sand and flower petals from around it. Through an interpreter, she asked how she might create an altar at her home. As she lovingly touched the sand and petals she asked if it was ok to put her statues of Jesus and Mary on the altar too.

On the evening of 9.9.9 we became a family of heart centered humans. We were empathically united with one another and with all humanity. You could feel that wave pervading the group. We experienced feelings of peace, sacredness, power and meaning. It filled our faces that seemed illuminated from within.

This feeling did not end on the day after 9.9.9. Rather it lives in us now and for all time. It can be summoned with a thought or a memory. It can be activated with feelings of good will and well-being. Because of that activation we have become guardians and custodians of a collective cosmic vision - a vision that is present and gives us purpose when we remember to come from the heart.

BEAUTIFUL description of this celebration/ceremony!! WISH I could have been there!!

Anything coming up in Oct. or Nov. as I'll be returning for a 1-2 month visit after a 3 year absence while living in Costa Rica!!

I'd LOVE to connect with other like-minded Spirits while in the Sarasota area!! E- me (Vicki Skinner) at SarongGoddess@gmail.com