years, their mission was to fly to Jupiter and Saturn.  Then maybe, if everything worked out just right and the mechanical parts didn't freeze up, go past Uranus and Neptune.  Thirty years later they're now poised at the edge of our solar system and headed for deep space.
You may be wondering what Voyagers 1 & 2 have to do with 2012.  Probably nothing specific  but maybe everything in the abstract.  Scientifically and philosophically, Voyager was the best earth had to offer the cosmos.  If there were other beings out there, we not only wanted to contact them, but we wanted them to know about us.
Voyager was a messenger representing earth's hope for the future.  Each one carried a Golden Disc time capsule embedded with the sound of 55 languages and 115 images intended to communicate the story of earth to other space civilizations.  We were reaching out to the stars and desperately hoping someone would hear us.
Maybe the Mayan calendar served a similar purpose as Voyager.  It was also a 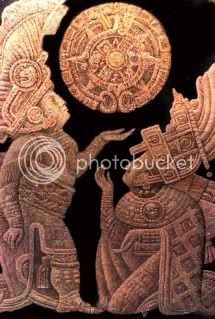 messenger out of time that told us about an ancient culture.  The Mayan Disc presented a time-capsule of their recorded history, and shone a light on their knowledge of astronomy and mathematics.  The calendars within calendars explained the governance of their land, how they measured time, and best of all indirectly gave hope to future generations - ours.
In many ways, the messages of the two discs are universal in scope.  They portray another time on earth.  They ask us to respect the old ways.  They suggest we might consider alternate possibilities for the future and perhaps choose a different path than the one being followed.  When the Mayan Discs were found, interpreters created a stir by predicting the world would end on the Winter Solstice of 2012.  More enlightened minds in the last 10 years disputed that theory by insisting the "end times" were simply that - the end of one long cycle and the start of another.  Instead of our species dying out on 12/21/12 we'd wake up on the 22nd with a renewed purpose.  In the awareness of the date, many of us would go on living our lives but with higher values and in more aligned states of being.
The young engineers who launched Voyager are now grandfathers.  They are being taught by  younger scientists and physicists.  Using newer technology, the young engineers are issuing commands to the two tiny ships so they can continue deep space exploration using less energy than it takes to run three light-bulbs.  They hope that when the spacecraft finally fall silent in the years to come, the message on the Golden Discs that once promised a peaceful earth would in fact be so.
While Voyagers discs have not yet been found by another civilization, it's pleasant to 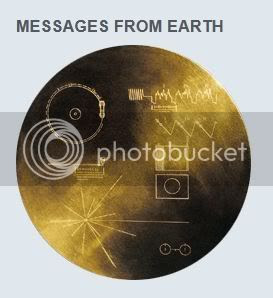 consider another species finding the discs, deciphering the messages, and visiting earth.  Who knows, maybe our great great grandchildren will be the ones traveling to distant galaxies to find the discs.
But at the end of the day, or cycle, or time-line, the message from both discs is that the inherent human spirit is creatively alive and filled with hope;  that we look to the stars for inspiration; and there's the ultimate message of hope.  It is one that says wherever humans reside or interact with other species, spiritual peacefulness will prevail not just on earth but across the galaxies.
The message of the discs suggests that we have the power to form a new consciousness.  In a world view we can acknowledge differences yet embrace the one-ness of all people.  We are on the threshold of a glorious and peaceful universe.  It's ours to create.  And that is the biggest message of 2012 and beyond!
Jo Mooy - January 2012
Posted by StarSoundings at 4:40 AM